By now you’ve seen these headlines. But what can we learn from the study behind them, and the way it was reported? 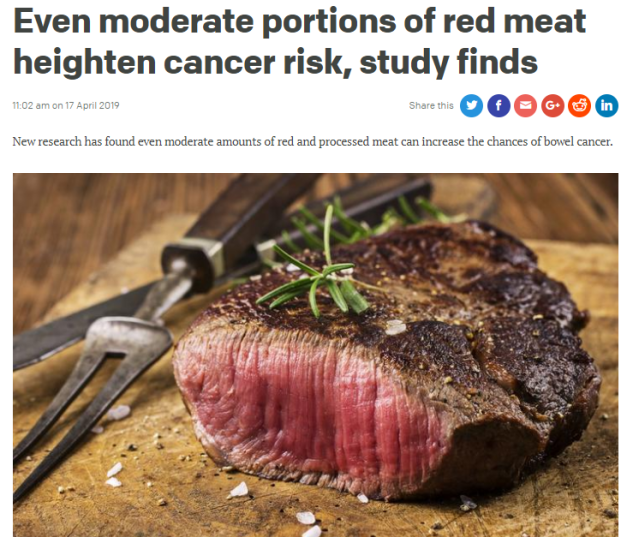 The UK Biobank study was a prospective epidemiological study, using the following methods to look at several foods and their association with colorectal cancers:

We used Cox-regression models to estimate adjusted hazard ratios for colorectal cancer by dietary factors in the UK Biobank study. Men and women aged 40–69 years at recruitment (2006–10) reported their diet on a short food-frequency questionnaire (n = 475 581). Dietary intakes were re-measured in a large sub-sample (n = 175 402) who completed an online 24-hour dietary assessment during follow-up. Trends in risk across the baseline categories were calculated by assigning re-measured intakes to allow for measurement error and changes in intake over time.[1]

Here’s a sample of the questionnaire that was used. You’ll see that it collects information about many more types of food than appear in the results. We don’t know how the reported foods were chosen – we’ll return to this later with regard to fibre.

What were the results?

During an average of 5.7 years of follow-up, 2609 cases of colorectal cancer occurred. Participants who reported consuming an average of 76 g/day of red and processed meat compared with 21 g/day had a 20% [95% confidence interval (CI): 4–37] higher risk of colorectal cancer. Participants in the highest fifth of intake of fibre from bread and breakfast cereals had a 14% (95% CI: 2–24) lower risk of colorectal cancer. Alcohol was associated with an 8% (95% CI: 4–12) higher risk per 10 g/day higher intake. Fish, poultry, cheese, fruit, vegetables, tea and coffee were not associated with colorectal-cancer risk.[1]

76g doesn’t sound like much, but believe it or not was the highest meat and processed meat category in the results. What’s a 20% increase in terms of absolute risk? Because the risk is reported as HR not RR we can’t be exact, but the absolute risk of CRC in the study over 5.7 years was 0.5%, 20% would raise that to 0.6%, which is an increase in absolute risk of 0.1%, or one extra chance in a thousand.
But that summary doesn’t tell us the full story; there are two interesting details in the paper. The first is placed right at the start – this “results” table usually appears once tables for factors like representivity and the confounders at baseline have been displayed, which is the approved way of showing the strengths and weaknesses of the epidemiological process, but not this time. Zoe Harcombe has pointed out that the red meat associations cross the centreline, that is, they are – as always – not statistically significant. (I don’t remember the authors mentioning that to the press). 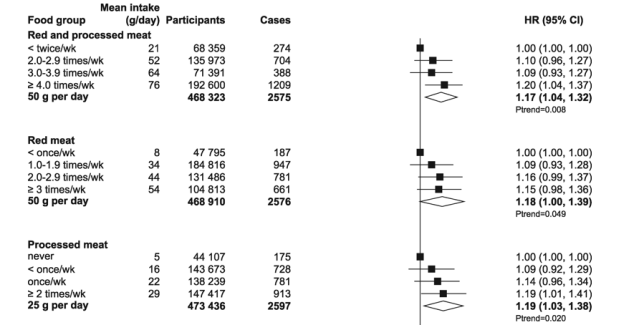 The other important fact they didn’t mention appears further down the paper. And I mean right down near the bottom, with the details restricted to the supplementary papers!

So of all the associations tested, only fibre from grains (14% lower risk, remember) had any association with colorectal cancer risk in women, or the same risk as seen in men. 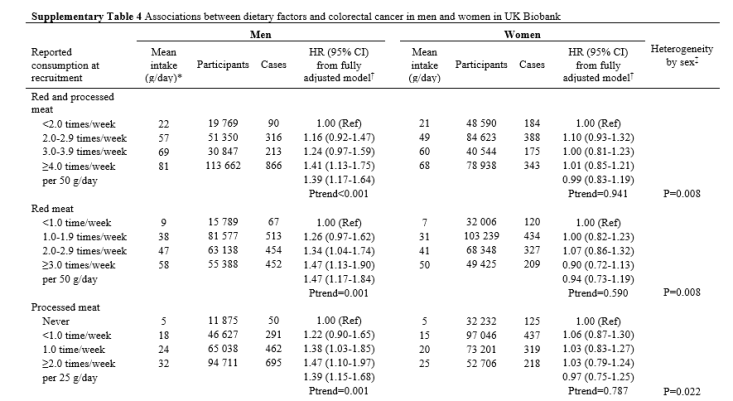 Meat and cancer risk for women is in the right-hand column – nothing, nada, bupkis, zilch

We’ve looked at several of the reports on this study in the media, and the study authors don’t mention women in any of them that we’ve seen. The results are reported as if they apply to everyone regardless of sex. Usually a reporter might pick up on such a detail and ask a question about it, but in this case the study authors hit the media before their study was posted online, so reporters didn’t have a chance to read it.

It’s an important and worrying omission for several reasons:

Women have been poorly served by medical science, which has often used male subjects for convenience, arriving at results which were just wrong for women. Caroline Criado Perez has recently published a book on this problem, Invisible Women, a section of which was published in Canvas magazine recently (March 23, 2019). In the UK Biobank study the authors had a large cohort of women – there were more women than men in the study – but as far as publicity was concerned they completely ignored the women’s distinctive results.

Women are more likely to be health-conscious than men (so far as we know, meat-eating hasn’t been associated with increased disease risk in the “health conscious” subgroups of the cohorts in any studies which apply this test). We know this generalisation is true from our work with What The Fat? and PreKure. This means that women are more likely to be aware of, and be influenced by, health messages in the media.

Women are more likely to be harmed by meat avoidance, because rates of iron and zinc deficiency are higher in women. B12 deficiency is also well worth avoiding. Fiona Greig, Beef and Lamb New Zealand’s well-informed head of nutrition, makes an especially good case in the Herald report on this study considering that she didn’t have access to the paper when she was asked to respond. Dr Felice Jacka who has studied the links between diet and depression for several years, including with a successful RCT, recommends 65-100g of red meat a day as part of the protocol for preventing anxiety and depression, which are strongly associated with meat avoidance. Misinforming women about the health effects of meat-eating has the potential to do real harm; let’s not forget that New Zealand is facing a mental health crisis, and that our government has set “wellness” as a target. 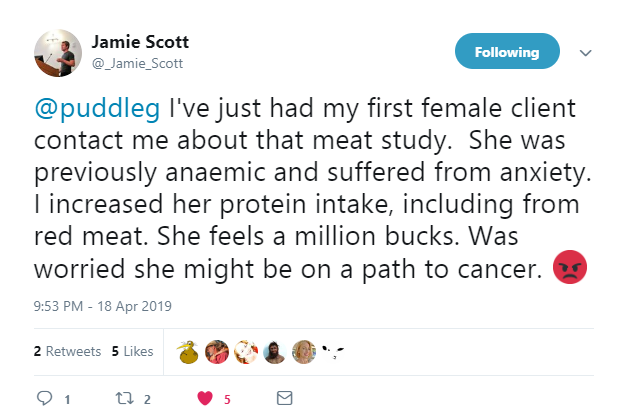 An additional reason that the null association in women should have been reported is, that it informs our confidence in the association being causal. Consistency and coherence are Bradford Hill criteria useful in assessing the links between association and causation. Completely different results for men and women are inconsistent (as are the results of other studies with no CRC associations for red meat, such as EPIC-Europe, or no cancer association for processed meat, such as the recent Seventh Day Adventist study). Nor does this give a coherent picture; this is not how “carcinogens” are expected to behave.

In both men and women, grain fibre was associated with a 14% lower risk of colorectal cancer. Does this mean we all need to eat wholegrains? Not so fast – remember that the questionnaire collected data on many foods, including “white” carbs – white bread, white rice, pasta, pastry, and so on, as well as sugar. As the study was a UK study, total fibre intakes were pretty low by world standards. In the UK white bread is supplemented with folic acid (though this only became mandatory in 2018), and long-term exposure to high doses of folic acid (i.e not its temporary use in pregnancy, which is safe and beneficial) is also believed to be something of a risk factor for colorectal cancer (one reason folic acid fortification of bread, though usual, isn’t yet mandatory in NZ). Folate, the slow-release form of folic acid found in whole foods, is not thought to increase risk, and wholegrain bread doesn’t need to be fortified.
So were refined carbs, like white bread and sugar, associated with CRC in UK Biobank? We just don’t know; maybe this will be the subject of a future paper. In the EPIC-Italy cohort, from 2017, we find that “High intake of carbohydrate from high GI foods was significantly associated with increased risk of colon and diabetes-related cancers, but decreased risk of stomach cancer; whereas high intake of carbohydrates from low GI foods was associated with reduced colon cancer risk.”[2] Which figures.

Because, what do we know with certainty about the causes of increases in CRC risk? Genetics plus ageing mean that cancer risks are never non-existent, but there are three factors the avoidance of which should keep them low –

Micronutrient deficiencies. Low selenium status, and low levels of PLP, the active form of B6, have been associated with increased CRC risk, and no doubt other micronutrient associations can be found. New Zealand is known for its low soil selenium status and high rates of bowel cancer. The risk is highest in the South Island, where selenium levels are lower because more imported food is eaten in the North.

Carcinogen exposure. This is the obvious one, one that is easy to overlook because it’s difficult to measure in a FFQ. But think about who works more in these kinds of industries – men or women? What are they likely to eat? Are these industries that will attract many vegans or vegetarians?

And maybe it’s the oil too – in the recent China study RCT co-authored by Otago’s Jim Mann, a diet high in soybean oil, which is toxic to gram-positive bacteria, caused changes in the gut microbiome that have been associated with a higher CRC risk. It’s early days for this question, but we don’t recommend the extensive use of vegetable seed oils for a number of good reasons, hence “low carb healthy fat”.

The question of meat

We’re not concluding that meat, along with some other far less nutritionally valuable foods, can’t contribute to colorectal cancer, in men or women. Cooking methods might matter, as charred meat contains small amounts of chemicals called HPAs, which are carcinogens in high concentrations (interestingly HPAs are neutralised in the gut by acrolein, a carcinogenic toxin in its own right at high levels, which is formed by the burning of fat, by the beneficial probiotic Lactobacillus Reuteri, and by normal metabolic processes – clearly an example where the dose, and the context, makes the poison).[6] High intakes or serum levels of iron are also possibly cancer promoting, but the differences between meat intakes in UK Biobank don’t seem large enough to be explained in this way. Nor does iron retention explain the difference between men and women, as the average age at the start of the study was 55 and the majority of women had passed through menopause. Blood donation, which significantly lowers iron levels, is associated with a reduced risk of some diseases – but not colorectal cancer.[7]

It may also be relevant that some processed meats, especially those which go through “wash” processes,  are very poor sources of micronutrients when compared with their unprocessed equivalents, with vitamins and minerals being lost during processing. Meat is a source of many of the micronutrients and amino acids involved in detoxification and antioxidant defense, including selenium. Thus if red meat does have an effect on cancer, this is likely to be bidirectional, which would be less true for some processed meats.[8]

If anyone on a low carbohydrate diet is convinced by the reduced CRC risk associated with grain fibre, which is also seen in other studies for other diseases, and unconvinced by the argument that this just shows the same benefit of avoiding refined grains that we’re already enjoying, organic oat bran can be added to mince dishes such as patties and meatloaf, and makes an ideal binder.

Note that the richest animal food sources of saturated fat, the dairy products, were not associated with CRC in this paper (and usually have protective associations); higher HDL and the log[TG/HDL] ratio (AIP) were associated with lower CRC risk in EPIC-Europe in fully adjusted models, as was higher cholesterol before adjustment.[9]

(Oh, also – fibre from fruit and vegetables not associated with cancer risk – what’s that about, 5+? It’s a fairly common finding in epidemiology, weak or no protective association for fruit and/or vegetables, but it never makes the news. When it contradicts the received version, we’re supposed to ignore science. So, eat your veges – after all, you have to eat something, and they’re going to be better for you than refined carbs!)

← Aseem Malhotra’s talk to the UK parliament
Here we go again – is a saturated fat tax back on the table? →