Red Meat Will Kill You – and make it look like an accident.

By George Henderson and Grant Schofield

Disclaimer – we’re not recommending that people eat red meat in preference to white meat, anymore than we think people should eat red peppers instead of onions. A mixed diet of various types of animal and plant foods, as close to nature as is consistent with good hygiene, good digestion, and good eating, is the default option for good nutrition.

However, red meat epidemiology is the modern example of bad science which, because it panders to a vegetarian bias that runs along class lines, isn’t being properly criticised and is allowed to regularly misinform the public about nutrition.

The knives are out for red meat again

This latest example is particularly worth examining because its faults are very clear and give an insight into what may have gone wrong with other studies of this sort behind the scenes.[1] They even allow us to make recommendations about how to improve these studies in future.

The BMJ has published a “new” epidemiological paper from the NIH-AARP study (based on FFQs sent in by mail from half-a million people, an impressive number) in which red meat – compared with white meat, which includes both chicken and fish – is associated with an increased risk of cancer, heart disease, and all-cause mortality.

This comes along with no less than two accompanying editorials one from Professor Potter, from Massey University NZ telling us to give up meat for the sake of our health and the planet’s.[2] Just what you’d expect, right? All those warnings about red meat couldn’t be for no reason, and all that stuff about TMAO, haeme iron, and saturated fat has to mean something, right? And those cow burps and farts have to be worse than dinosaur burps, mammoth burps, or bison burps ever were, right? 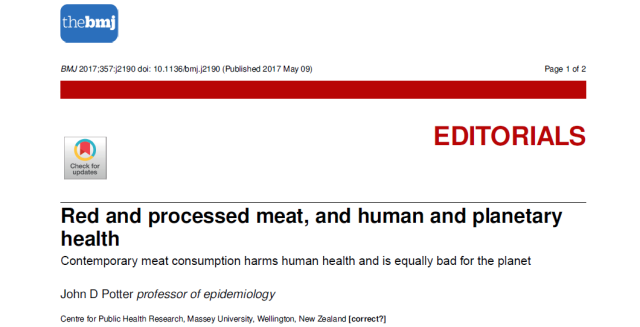 Not so fast – there are even stronger associations between unprocessed red meat and liver disease mortality and respiratory disease mortality. How did that happen? The authors are left floundering around for explanations – they settle on nitrites and nitrates. But hang on – the association is for unprocessed red meat, and not for processed white meat, so that makes no sense. And we know that saturated fat, as found in beef fat, protects against alcoholic liver disease, whereas polyunsaturated fat, as found in chicken, makes it worse – and this is a very strong, consistent, and reliable experimental finding – so, what gives?[3]

Luckily an earlier paper also looked at the same data sets, and this allows us to clearly see what went on.

In the 2009 paper that looked at the same aspect of the NIH-AARP data – red meat, white meat, and mortality – in a slightly different way (i.e. without the dodgy and unrealistic “substitution” analysis), the associations between unprocessed red meat and accidental death in men, HR 1.26 (1.04-1.54), were as great (albeit with slightly wider CIs) as the associations for cancer mortality, HR 1.22 (1.16-1.29) or CVD mortality, HR 1.27 (1.20-1.35). There was a comparable protective association between white meat and accidental death which was non-significant after adjustment.[4]

So what’s the biological mechanism by which red meat causes accidental death in men? If anything, the cognitive effects of deficiencies of red meat nutrients such as vitamin B12 suggest that an unconfounded relationship should run in the opposite direction. Men’s risk of accidental injury mortality in the US is 2-3x that of women, accidental death rates in NIH-AARP were low, and the association was not seen in women. However women’s accidental deaths may be less due to risk-taking behaviour than the deaths of men (for example if women are more likely to be victims in vehicular accidents caused by men than by women); so accidental death in men is by far the bulk of deaths caused by accidents in the NIH-AARP population (similar to the gender difference in deaths from heart attacks).

The finding for accidental death gives us some idea of the effect of healthy-user bias in this population. Perhaps men who ignored health warnings about red meat and did not replace it with white meats (or vegetable protein) were more likely to ignore basic health and safety advice, or work in dangerous workplaces. Dangerous workplaces are also places where one can be exposed to carcinogens and pollutants which increase cardiovascular risk. People who ignore health warnings about red meat are also likely to ignore warnings about sugar-sweetened beverages, and highest intake of fructose from SSBs was also associated with cardiovascular mortality in NIH-AARP.[5]

Who can spot the possible confounding in this sort of study? Give yourself a pat on the back if you can…..you’ll be ahead of some of the more claimed epidemiologists in modern nutrition science!

The potential for healthy user bias can clearly be seen in the baseline data (Table 1), with many more men, a more than doubled rate of smoking, and a mean BMI of 28.3 vs 25.8 in the highest red meat quintile.[1] Good luck adjusting for all that. And what does this adjustment mean in reality anyway? It is a mythical person.

For some reason accidental death was dropped as an outcome of interest in the current study, concealing important information about the likely effect of healthy-user bias on the results, and the analysis did not include adjustment for fructose, high-GI carbs, or other nutrients of interest.

Risk-taking behaviour and workplace safety are even more important considerations with regard to the two strongest associations in the BMJ paper, liver disease mortality (risk of both viral infection and hepatotoxicity from drug-taking) and respiratory mortality (pollutant exposure), causes of death which lack mechanisms sufficient to explain the strength of association with red meat in this paper.

But what about the mechanisms? Doesn’t heme iron cause cancer, and TMAO from red meat cause heart disease?

The truth is probably more complicated than that. For example, heme iron can interact with other chemicals to increase production of the hydroxyl free radical, which can damage DNA, but it’s also needed for the catalase enzyme that turns peroxide radicals to water, and the CYP450 enzymes that detoxify most of the carcinogens we’re exposed to, among other things. This may help explain why, in those rare studies that control for healthy-user bias by matching sets of individuals, vegetarian and vegan diets are associated with more cancer, not less.[6,7]

Although TMAO levels in serum are associated with cardiovascular mortality, high TMAO levels are likely to be a warning sign of kidney disease, or some other metabolic disorder, rather than a causative agent.

The evidence for this is 1) that chemicals which are precursors for TMAO are found in large amounts in nuts and fish, which are negatively associated with CVD mortality, 2) that carnitine, the precursor of TMAO found in meat, prevents heart attacks when given in large doses as a supplement to patients with established heart disease.[8]
The evidence seems to say that, while there are mechanisms by which red meat can cause CVD and cancer, there are also mechanisms by which red meat can prevent CVD and cancer, and at a population level these mechanisms, if they are important, seem to cancel each other out anyway in health-conscious individuals who choose to eat meat.
There is however evidence for limiting red meat (or donating blood) in persons with high ferritin levels, especially with the genetic condition known as familial haemochromatosis.

But what about the planetary health?

In New Zealand, lamb and beef, venison and goat (but not so much dairy) are being farmed on pasture land established a couple of centuries ago, and watered with the rain, whereas pork and chicken, even free-range chicken, are being fed grains and soy, much like factory farmed beef in the US. Red meat (other than pork) as grown in NZ is thus not bad for the planet, but instead sequesters carbon, fertilises the land, and maintains the stability of topsoil undermined by plant monoculture farming (which is how plant crops are grown outside market gardens and organic or semi-organic mixed-farming model farms these days). We waste food by not eating as much organ meat, fat, and bone as we used to (because we’ve been indoctrinated by health experts to eat “lean meat”, i.e. the more expensive muscle meat, and throw the rest away), and this is not great for the planet. Zoe Harcombe has written a more detailed analysis of the environmental claims in Professor Potter’s editorial here.

New Zealanders do not eat “too much” red meat in any case. The 2008/9 NZ Adult Nutrition Survey showed that Kiwis consumed more iron and protein from grains than from all animal foods combined. When you consider that animal food including meat is a very good source of these nutrients and grains are (or ought to be, in the natural, whole grain, state) a very poor source, this might suggest that the average Kiwi diet is either badly out of proportion or over-processed or (our bet would be) both.

We can think of ways to protect future epidemiological studies from the inaccuracies likely to be in this latest one.
1) Always give results for accidental death, ideally for men and women separately, in any mortality analysis. This will allow some assessment of healthy-user bias. (Injury requiring hospitalisation rates could be given in papers without mortality outcomes).
In the BMJ paper, the authors already knew about the association with accidental death from their 2009 paper but chose not to include it when they were being funded by the WHO, an organisation that seems to have taken up an activist position against red meat to go with its already dated position on salt and saturated fat.
2) Where possible, give subgroup results for closely matched, and equally health conscious, subjects; those with the same income, BMI, smoking rates, ethnicity and gender balance, etc.
We also think it would be a good idea if professors of agriculture, preferably ones with farming experience, wrote more editorials about planetary health, if that’s what the medical journals are after.

15 Comments on “Red Meat Will Kill You – and make it look like an accident.”