The case study is a very important type of medical publication that’s overlooked in this age of big data. Unlike large statistical studies, which tell you the probability of something happening, the case study tells you whether something CAN happen at all, and under exactly which circumstances it has happened.

Yes, it can, and this is described in full detail and a clear and simple style in a new case-study from Christchurch.[1]
2017 Nelson Jacobs Case report Management of autoimmune diabetes without insulin

This is published on Zenodo.org, an online data repostitory set up by people involved in CERN and other places. Warrick Nelson, the first author is the patient and is an operations manager at Plant and Food Research in NZ. The second author is his doctor. This is citizen science.  We love it.

So onto the topic of diabetes, and  management of the condition with low carb diets……

We reviewed the strong evidence for low carb diets in diabetes management in the New Zealand Medical Journal in a 2016 review cited in the current paper.[2]

Its case study is a great example of how the wisdom of Citizen Scientists, equipped with mass produced measuring devices and, in this case, a proven medicine, can discover the one way to treat a disease. It is written up by the patient and his doctor, who was wise enough to recognise this as the teachable moment it is.

The patient first presented with type 2 diabetes, non-alcoholic fatty liver disease, insulin resistance, and a high risk TG/HDL ratio. He was highly motivated and was able to lose weight and correct all of these issues with a better diet and metformin alone.

In early 2013 the patient, a white male 53 years of age, was diagnosed diabetic following a routine screening test, based on fasting glucose of 10.8 mmol/L and HbA1c of 58 mmol/mol (7.5%). Mild overweight, especially abdominal, mild hypertension, mild dyslipidaemia and elevated liver function panel (Table 1) indicated the onset of T2D. Metformin 500mg twice daily and 10kg weight loss were indicated. Advice on weight loss was primarily calorie control (particularly between-meal calories, as the patient self-reported a tendency to snack in the evenings on biscuits). Snacks were recommended to be reduced and cheese or almonds suggested as options. The patient was highly motivated and within nine months HbA1c test showed a pleasing result at 37 mmol/mol (5.5%) and BMI of 26 (Table 1).

A year later and the patient has signs of Type 1 Diabetes, this pattern is known as Latent Autoimmune Diabetes of the Adult (LADA).

However, a year later a routine HbA1c of 83 mmol/mol (9.7%) occurred, associated with unexplained weight loss and fatigue. By this time, the BMI target was very close to achievement. Anti-GAD tests were ordered on the assumption it was likely the patient had resolved to a Type 1 diabetic pattern. The result was unrecordably high autoantibodies and the patient was referred to a specialist diabetes clinic to begin insulin therapy.

But in the meantime the patient has begun testing post-meal blood sugars and eating accordingly – note that the doctors or dietitians had already recommended eating almonds or cheese instead of biscuits in the weight-loss phase, so he has a general idea of the alternatives.

In the interim, the patient had begun using a home glucose meter with nearly immediate resolution of blood glucose from the 15-23 mmol/L range to sub-10 postprandial tests (Figure 1). This was achieved by an immediate drastic reduction of bulk dietary carbohydrates, primarily experimenting with reducing carbohydrate intake to achieve acceptable postprandial glucose levels. A food diary indicated sub 100g carbohydrate per day, and more stringent dietary intervention from January 2015 suggests <75g/day is being achieved.
The patient attended two clinic visits, but expressed reluctance to begin insulin therapy while home blood glucose testing indicated dietary interventions were working. At this time, HbA1c had already reverted to 49 mmol/mol (6.6%) and by the second visit, 3 months later, was down to 38 mmol/mol (5.6%). Further autoantibody tests indicated both IA2 and ICA at the top of the measurable range. A fasting insulin test returned 66pmol/L.

But can it be healthy, eating such a restricted diet?

The patient reports the new diet is completely satisfying, tasty and easy to manage other than when faced with commercial food offerings eaten away from home. In particular, airline and hospital “diabetes” choices are completely incompatible with a low carbohydrate diet. The patient reports completely removing wheat flour products (such as breads, cake/biscuits, pasta, couscous), potato, rice, maize and other obvious high starch products (including gluten free options such as quinoa and buckwheat). The dietary bulk provided by these foods is largely replaced with salad and vegetable as appropriate. High carbohydrate vegetables (such as carrots, pumpkin, green peas) are not eliminated, but are eaten in moderation.

But surely the results are not sustainable?

Quarterly HbA1c tests have remained at ≤40 mmol/mol (≤5.8%) for two years on this diet. The patient has felt confident to reduce the frequency of home blood glucose testing to one day per week of pre/post prandial testing for one or two meals on that day plus occasional testing following introduction of new food items. 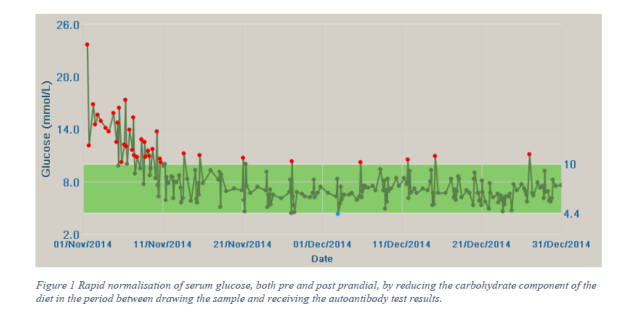 The authors discuss how failing islet beta-cells in late-onset diabetes tend to keep producing low levels of insulin (we think this might be more likely if they’re protected from lipotoxicity – excess fat – and glucotoxicity – excess sugar; the weight loss phase where NAFLD was reversed would have helped avoid the former, the low carb diet the latter).[3] We have theorised previously that the different gut hormone responses to a low carbohydrate meal, which include a lower release of glucagon and a higher release of somatostatin 28, can contribute to controlling post-prandial glycogenolysis, lipolysis, and proteolysis at a lower insulin level.

Reading this report, we are bystanders at a revolution in medicine. This patient has decompensated diabetes, and it’s unlikely any variation on a higher carbohydrate diet would be able to control their blood sugar without insulin. In fact, the hospital diabetes diet is completely unsuitable for this purpose. If the low carb diet is suitable, and the hospital diet isn’t, for this critical aspect of diabetes management, what then?

Hospital diabetes diets are generally the high-carb, low fat, dietary guidelines type of diet that was introduced into diabetes care without any RCT comparison with the low carbohydrate (<130g/day CHO) or very low carbohydrate (<50g/day CHO) diabetes diets that have outperformed it in RCTs ever since.[2] These diets are normally grain based, nutritionally poor, and high in glycemic load. Their only concession to diabetes management is that the carbs are counted and (supposed to be) spread throughout the day. They require higher insulin dosing than would be the case with low carb diets, and thus make it harder to maintain blood sugars safely within the normal, non-diabetic range, so higher cut-offs are accepted as “good management”.[2] This case, as well as the evidence we included in our review, and a more recent RCT of a low carb diet (70g/day CHO) for type 1 diabetes published by Jeremy Krebs’s team in New Zealand,[4] show that this approach needs to change.

← The battle over the causes of cardiovascular disease heats up!
Red Meat Will Kill You – and make it look like an accident. →

13 Comments on “NZ case study; A citizen scientist controls autoimmune diabetes without insulin, with a low carb diet, a glucose meter, and metformin.”