The CANHEART study: Is higher HDL better? It depends, but the answer is yes. 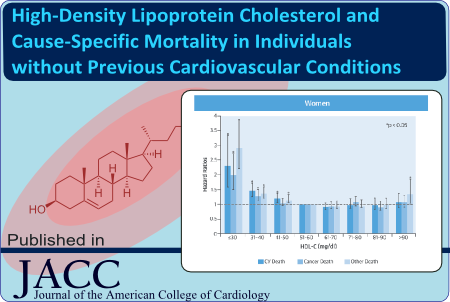 HDL cholesterol is one of the strongest predictors of both cardiovascular and cancer risk. It’s especially useful as this association seems to have no genetic basis, which implies it’s a modifiable risk factor. All non-drug interventions that improve health, for example by lowering weight, blood sugar, or inflammatory markers also raise HDL, including low carb diets, Mediterranean diets, and exercise. Raising HDL is usually considered a good thing. HDL is even called “good cholesterol” by the kind of ninnies who think that millennia of evolution have succeeded in producing something that deserves to be called “bad cholesterol”.

But there’s recent claims that high HDL is actually bad for cardiovascular disease at least,, after all.

CANHEART was a large (n= 631,762) pooled study in Canada, in which the association of HDL with mortality from CVD, cancer, and all other causes was determined over a follow-up period of 4.9 ± 0.4 years, during which there were 17,952 deaths.[1]

Low HDL was associated with high death rates from all 3 causes, but surprisingly the CVD benefit plateaued at a fairly modest level, and very high HDL was associated with increased risk of non-CVD mortality. Especially levels over 90 mg/dl (2.33 mmol/l), but also over 70 mg.dl in men (1.81 mmol/l). CVD mortality overall was lowest in the range 51-90 mg/dl (1.32-2.23 mmol/l). These findings, as reported, supposedly debunk the idea that raising HDL is a good idea. Of course, raising HDL with drugs by sticking a spanner in the works at some point has never been an effective strategy and, as we shall see, there are genetic polymorphisms that give elevated HDL of little worth, but healthy diet and lifestyle changes that are reasonably expected to extend life always raise HDL a bit. Is this meaningless? 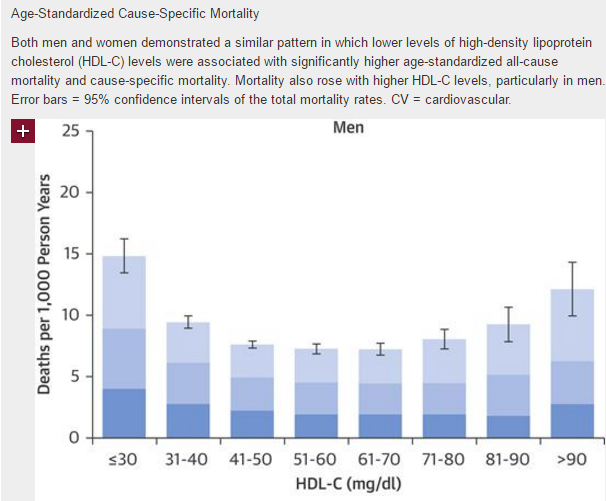 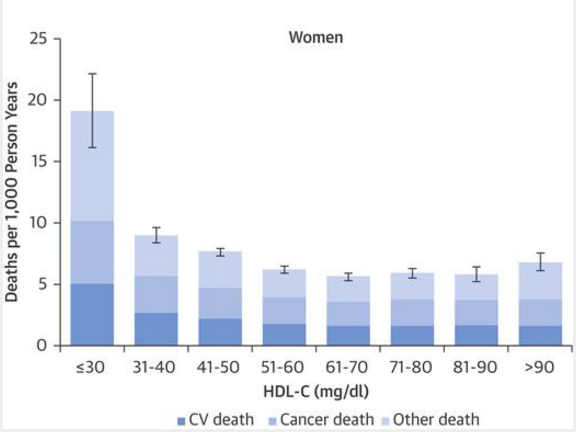 The levels associated with harm are very high HDL levels, and it’s relatively unusual to see levels this high in non-drinkers on LCHF diets, no matter how much coconut oil they eat. However, high alcohol intakes, as well as exposure to some drugs and toxins, can produce this effect, as can certain genetic variations. The conditions are collectively known as HALP, which is short for hyperalphalipoproteinaemia (we’ll stick with HALP).[2]

One of the most common causes of HALP is alcoholism. Alcohol elevates HDL and at moderate intakes (around one standard drink a day) this is associated with benefit, but at high intakes there is no benefit and an increased risk of death from non-cardiovascular causes, including cancer. Ko at al in CANHEART claimed to have adjusted for excess alcohol intake, which was highest in those with highest HDL;

“Heavy alcohol consumption, as defined by the use of 5 or more drinks on 12 or more occasions per year was also included in the model for non-cardiovascular non-cancer death.”

I hate to break it to you, but getting drunk, even blind drunk, once a month will probably not raise your HDL much if at all. You really need to be a chronic alcoholic. In 2012, approximately 5 million Canadians (or 18 % of the population) aged 15 years and older met the criteria for alcohol abuse or dependence at some point in their lifetime, but how many at any one time qualify as chronically alcoholic is unknown. We know that Canadians have a per capita consumption of 10.2 litres of pure ethanol per year. That’s 27ml per day – a 200ml glass of wine – for every man, woman, and child over 15. If (for example) only 1 in 4 people drank regularly, that would be a bottle of wine a day each.

Even so, the data used in CANHEART to make the alcohol adjustment was far from complete.

“Since the use of smoking and alcohol was not available in entire CANHEART cohort, we imputed smoking status and heavy alcohol use for those with missing data based on the characteristics of the respondents to the Canadian Community Health Survey. Multiple imputation using complete observations and 10 imputation datasets was conducted. Smoking status was available for 5,093 individuals and alcohol use was available for 5,077 individuals who completed the survey.”

This was a tiny fraction of the 631,762 individuals in the study – less than 1% – and it involved voluntarily self-reported health data;

Alcohol intake is known to be misreported in dietary surveys by a factor of 2-3. Alcoholism is probably under-reported to health professionals to a much greater extent, especially in countries where health insurance is a major factor in access to care.

Another confounder is the effect of genetic polymorphisms. One genetic cause of very high HDL is a CETP defect.

“…the in vitro evidence showed large CE-rich HDL particles in CETP deficiency are defective in cholesterol efflux. Similarly, scavenger receptor BI (SR-BI) knockout mice show a marked increase in HDL-cholesterol but accelerated atherosclerosis in atherosclerosis-susceptible mice. Recent epidemiological studies in Japanese-Americans and in Omagari area where HALP subjects with the intron 14 splicing defect of CETP gene are markedly frequent, have demonstrated an increased incidence of coronary atherosclerosis in CETP-deficient patients. Thus, CETP deficiency is a state of impaired reverse cholesterol transport which may possibly lead to the development of atherosclerosis.”[2]

The CANHEART authors, Ko et al, do not mention the likelihood of such conditions affecting their analysis. Even if we assume that both chronic alcoholism and genetic HALP are rare conditions, men with HDL over 90mg/l were less than 0.3% of the study population, and of these few men, only a few dozen died during the study. The exact number isn’t clear because the only mortality data given is for adjusted age-standardized rates per 1,000, but from total deaths and these rates we estimate it to be (at the very most) 70-80 deaths, of which 30-35 were non-cardiovascular and non-cancer deaths, out of about 2240 men. The majority of alcohol-related such deaths in Canada are due to alcoholic liver disease, motor vehicle accidents and alcohol-related suicides. Had Ko et al given a breakdown of non-cardiovascular causes of death for the highest HDL categories, it would have been relatively easy to tell how many of these were due to alcoholism.

Overall, people in the high HDL categories at baseline exercised more, had lower triglycerides, less diabetes, lower LDL, more ideal BMI, and ate more fruit and vege than people in the middle and lower ranges.
Did these things cause them to die at a higher rate?
Here’s an alternative explanation – the baseline characteristics represent only the vast majority of people in each category.  The vast majority of people in each HDL category, even the highest, didn’t die. Even people with genetic HALP can be healthy. The people who died in the high HDL categories tended to be the people with alcoholism, drug induced HALP, and poorly-managed genetic HALP, and their baseline characteristics, had they been isolated, would have been quite different. These are the people for whom high HDL is not protective, and, as their numbers increased in categories of increasing HDL, the usual dose-response relationship between HDL and cardiovascular disease and cancer, seen in better-controlled populations, was lost.
(There would also have been metabolically healthy individuals who had low HDL for genetic reasons doing well in the low HDL category. For this reason the TG/HDL ratio and other available risk factors still need to be taken into consideration when evaluating HDL).

Healthy HALP seems to require low insulin and low triglycerides (TGs). This is exactly what we see in insulin-sensitive individuals, and in people whose HDL rises on the LCHF diet.

In hyperalphalipoproteinemia cases, we found a diminished TG/HDL-C plasma ratio that has been deemed as critically dependent on insulin activity. Although the plasma CETP activity measured by the exogenous method that reflects the plasma CETP concentration did not differ between the two groups the low TG/HDL-C likely is consequent to decreased endogenous CETP activity due to a diminished triglyceride availability from apoB-containing LP for exchange with HDL cholesteryl ester in hyperalphalipoprotaeinemia cases. In agreement with a primary role for insulin sensitivity in cholesterol metabolism and, to a considerable extent, in plasma HDL-C concentration variation, we found a diminished ALT level within the “reference” range in hyperalphalipoprotaeinemia cases, a result compatible with other reports relating ALT to insulin sensitivity.[3] 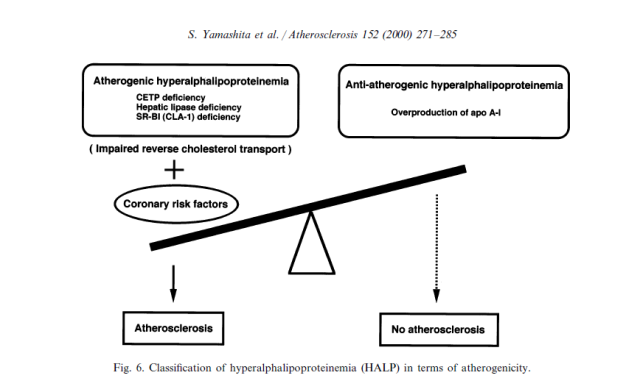 Over-production of ApoA1 is a possible side effect of the LCHF diet causing healthy HALP in individuals without genetic deficiency as a cause.

A possible criticism is the way that Ko et al have interpreted the-lipid lowering trial data to support their thesis. This is only valid if their intention is to discourage the use of HDL as a drug target. (Incredibly, pharmaceutical companies have invested billions in developing drugs that inhibit CETP, and have continued to test these despite sometimes disastrous and always disappointing results, the latest trial ending as recently as 2016).
They say “Several contemporary studies have shown a lack of significant association of HDL-C levels and outcomes for patients on higher-intensity statins, with coronary artery disease, or who had undergone coronary artery bypass graft surgery (12,13,15).”[1]
However, reference 12 states

In other words, people in the top quartile for HDL and ApoA1 on placebo had the lowest vascular risk, and these people got little if any extra benefit from LDL lowering with a statin. And because we are looking at quartiles, not isolating a small number of people who have freakishly high HDL for some reason, there is a true dose-response effect of HDL between quartiles in the placebo arm.

This effect has been seen in multiple trials. Drug trials are likely to exclude alcoholics and binge drinkers.

The evidence tells us that the predictive value of HDL is excellent, but is lost when people are undergoing intensive treatment for coronary artery disease, a classic case of Goodhart’s law, “When a measure becomes a target, it ceases to be a good measure.” We see this again and again with intensive drug treatment to manipulate metabolic markers.

Thankfully, it doesn’t seem to apply to diet and lifestyle interventions.

High-density lipoprotein or HDL is, like LDL, a large particle made up of various lipids and proteins (notably Apo A1 in the case of HDL, Apo B in the case of LDL) which is produced by the liver. Its role in cholesterol metabolism is to collect unwanted cholesterol, which is converted to cholesteryl esters (CE) by the addition of a fatty acid and transferred to LDL particles by CETP (cholesteryl ester transfer protein) for conveyance back to the liver. If CETP is deficient or inhibited CE accumulates in HDL, and LDL cannot complete its removal. Excess triglycerides (TG) from VLDL can also be transferred to HDL, and when the HDL particles become overloaded with TG they are unable to function as CE carriers and are removed from circulation, thus the association of high TG with low HDL and increased CVD risk.

← From Ancel Keys and the diet-heart hypothesis to LCHF may not be a huge leap.
Beyond Salt – our letter in the Lancet about salt, hypertension, and insulin. →

One Comment on “The CANHEART study: Is higher HDL better? It depends, but the answer is yes.”