Once again, the significance of a mouse study has been distorted by its authors and exaggerated by the media.  It grabbed our attention because it was the lead front page story in our national newspaper the New Zealand Herald, no less. Also, because we’ve been big advocates for lower carb intakes, especially for the insulin resistant amongst us, it flies in the face on what we are on about.

So let’s have a look at what’s going on. 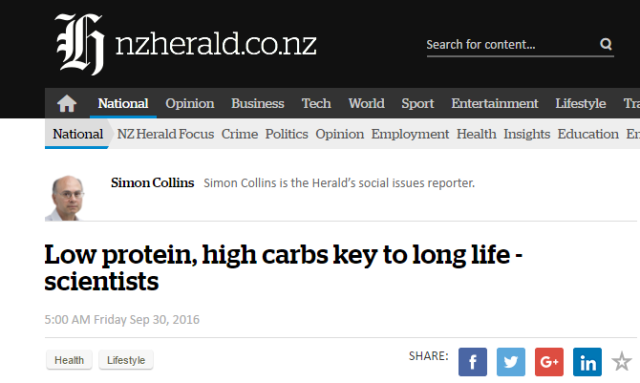 Common dietary advice has been turned on its head by new research finding that a low protein, high carbohydrate diet stimulates a hormone dubbed the “fountain of youth”.

The Sydney University group led by Dr Samantha Solon-Biet says a high-protein diet is good for reproductive health in younger adults, but recommends switching to a low-protein diet rich in vegetables and other natural carbohydrates from age 50 or 60 to live longer.

“A diet that optimises later-life health has a protein-to-carbohydrate ratio of 1:10,” Solon-Biet said.

The hormone this mouse study looks at is a protein called FGF-21. There is absolutely no evidence that this is a “fountain of youth” and really the myth of Ponce de León should be a warning to all these researchers – he never found the Fountain of Youth because it didn’t exist. Where this mouse research is interesting is because FGF-21, as well as having potentially useful effects in terms of insulin sensitivity, seems to be specifically important with regard to our appetite for sweet carbohydrates – when FGF-21 levels are high, carb cravings stop. So FGF-21 goes up when we eat carbs, so we know when to stop – but there’s such a thing as FGF-21 resistance, if levels are too high for too long we can become insensitive to it. FGF-21 levels also go up in other situations where we don’t need carbs – in prolonged fasting, or on a ketogenic diet. When you lose your sweet tooth after a few weeks on LCHF, that’s probably (in part) due to either a decrease in FGF-21 resistance or a rise in its level.

But it’s very important to realise that thousands of proteins are involved in complex processes like the regulation of appetite. Maybe FGF-21 is to carbohydrate what leptin is to fat, but it’s very much early days still.

Auckland University Professor Wayne Cutfield said the Sydney study was based on mice, not humans, and looked at only one hormone called FGF21 out of a large number of hormones and other factors which interacted with each other.

“FGF21 is one of many factors involved in regulating our lifespan. To say that FGF21 is ‘the one’ is just not true,” he said.

Herald health and fitness commentator Lee-Anne Wann said people should not rush out and eat more carbohydrates to increase their FGF21.

“It’s great that they are looking at it. We’ve looked at other things like leptin which help manage our appetite, we are always finding new things,” she said. “But it’s too soon to be saying, ‘Oh my god, we should be increasing carbohydrates.”

In this instance the Herald reporter Simon Collins has done a good job (if we accept that these claims needed to be covered at all; but it will be big news in Australia for political reasons). The NZ experts he interviewed really don’t buy into the hype.

How was the study designed? In a somewhat confusing way. Mice were fed 25 different diets, and the paper isn’t clear what these were, except that they had various permutations of the 3 macronutrients. However, if they were the usual mouse diets, the carbohydrate would be mostly maltodextrin, the protein casein (just one of the proteins in milk, but the one which has a bit of a dodgy reputation when considered on its own). The fat could be anything – lard, cocoa butter, canola. Fortunately not much is being made of fat here.

But there’s a red flag – the mouse diet was not “rich in vegetables and other natural carbohydrates”. In fact, the odds are very high that it actually supplied none.

How were the results presented? Again in a somewhat confusing way. These scientists like using a novel kind of data visualisation, but fortunately they did provide this clearer summary.

Here’s your Fountain of Youth.

Eating a protein restricted, high carbohydrate diet maximises FGF21, but this results in an increased appetite for protein, for which FGF21 may be responsible.
If FGF21 was the Fountain of Youth, then, to exploit this, you would need to eat in such a way that you would always be craving protein, and then, if you did eat enough protein, you’d lose your FGF21 advantage.

This does not sound like much fun, even for a mouse. Protein foods are flavoursome, come in considerable variety, and are excellent sources of vitamins, minerals, essential fats, and energy. The LCHF diet isn’t, and the Paleo diet needn’t be, high protein at all, but for humans there is a real advantage to keeping muscle on our bodies (mice, for example, don’t need to open jars or lift the furniture often). This helps us to stay active, makes us more useful in our daily lives, and helps with physical and mental health. Losing muscle because of some fad diet idea (sic) that involves restricting protein for longevity (rather than for some measurable shorter term benefit, which you can actually check) is perhaps not the first thing that scientists should promote in the media. Surely every mouse experiment doesn’t have to generate a headline – there are enough human experiments to be going on with.

But I guess “high carbs key to long life” in a headline is just irresistible.

The discussion part of the paper is indeed interesting, and at least some of these 20 researchers really do know their stuff, but some of them seem to be extrapolating from it in the media as evidence that one type of traditional human diet out of thousands is healthier than all the others. The facts are, that

The article also mentioned the Mediterranean diet. This is not actually low in protein, nor high in carbohydrate, as far as we know. A new EPIC study shows that a high Mediterranean Diet Score (they tested 4 different Med Diet scoring systems) is associated with lower mortality in an English population (i.e. compared to the normal English diet, one shudders to think what that is today). One interesting finding is the cholesterol counts of those with low and high Med Diet Scores. Mean total cholesterol in both groups is 6.2 mmol/L, LDL is 4 and 3.9 respectively, HDL is 1.4 and 1.5, TGs are 1.9 and 1.7.
So even the high Mediterranean Diet Score consumers in the UK tend to have high cholesterol, and the diet doesn’t make a lot of difference to that, yet it reduces cardiovascular and total mortality. Interesting.

A few years ago researchers showed that cell phone radiation cures Alzheimer’s Disease in mice. I don’t remember those researchers going all over the media telling us to strap cell phones to our heads from age 50 or 60 to think better. What is it about diet researchers?

← Can a high-fat diet protect against statin side-effects?
The plant-based diet bias in criticising LCHF: Katz and co →