The Most Famous New Zealand Mice in the World 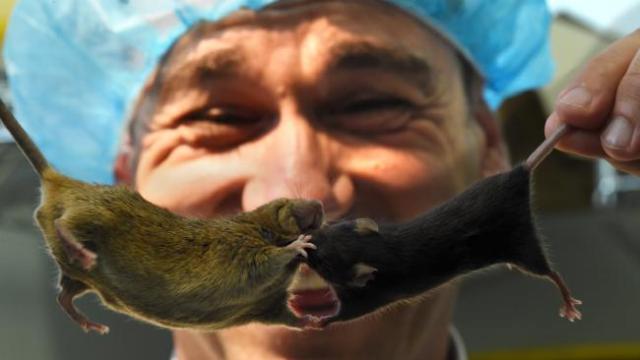 These are the most famous mice in the world right now.

They are called New Zealand Obese mice, which is a bit on the nose considering that they were born in Australia and became obese eating Aussie chow, but no matter.

The mice are famous because they belong to Son Andrikopoulos, who is the president of the Australian Diabetes Society.  Prof Andrikopoulos has previously used mouse research to make claims in Australian media that we should have fructose-sweetened drinks with our hamburgers to make us feel fuller.

It’s worth giving the full abstract for the latest study.

Dietary guidelines for the past 20 years have recommended that dietary fat should be minimized. In contrast, recent studies have suggested that there could be some potential benefits for reducing carbohydrate intake in favor of increased fat. It has also been suggested that low-carbohydrate diets be recommended for people with type 2 diabetes. However, whether such diets can improve glycemic control will likely depend on their ability to improve β-cell function, which has not been studied. The objective of the study was to assess whether a low-carbohydrate and therefore high-fat diet (LCHFD) is beneficial for improving the endogenous insulin secretory response to glucose in prediabetic New Zealand Obese (NZO) mice.

NZO mice were maintained on either standard rodent chow [n=8] or an LCHFD [n=9] from 6 to 15 weeks of age. Body weight, food intake and blood glucose were assessed weekly. Blood glucose and insulin levels were also assessed after fasting and re-feeding and during an oral glucose tolerance test. The capacity of pancreatic β-cells to secrete insulin was assessed in vivo with an intravenous glucose tolerance test. β-Cell mass was assessed in histological sections of pancreata collected at the end of the study.

An LCHFD is unlikely to be of benefit for preventing the decline in β-cell function associated with the progression of hyperglycemia in type 2 diabetes.

Now, it is a normal finding that a LCHF diet causes weight gain and increases blood glucose in obese mice. They are different to humans in this regard. However, the effect can be reversed by a sufficiently ketogenic diet. This was discussed by Mobbs et al in 2013,[1] with a discussion of its relationship to human studies. You see, it has been known for a long time that LCHF diets improve overweight and diabetes in humans. The mouse studies are meant to shed light on the mechanisms, but rodents just aren’t a good model for humans at LCHF ratios.

However, something else happened when Prof Andrikopoulos hit the media – this LCHF mouse study became material for an attack on Pete Evans and the Paleo diet.

“New research proves eating a paleo diet for just eight weeks can lead to rapid weight gain.” was the headline in the Herald Sun.

“Lead author, Associate Prof Sof Andrikopoulos says this type of diet, exemplified in many forms of the popular Paleo diet, is not recommended – particularly for people who are already overweight and lead sedentary lifestyles.
He says mass media hype around these diets, particularly driven by celebrity chefs, celebrity weight-loss stories in the tabloid media and reality TV shows, are leading to more people trying fad diets backed by little evidence. In people with pre-diabetes or diabetes, the low-carb, high-fat (LCHF) diet could be particularly risky, he said.
Low-carbohydrate, high-fat diets are becoming more popular, but there is no scientific evidence that these diets work. In fact, if you put an inactive individual on this type of diet, the chances are that person will gain weight,” Assoc Prof Andrikopoulos, President of the Australian Diabetes Society, said.

Most of the studies we’ve seen for LCHF diets in diabetes don’t involve intense exercise regimes. We’ve seen the kilos melt off inactive people in real life. Exercise is good for health and blood sugar control, but there’s no doubt that LCHF and Paleo diets work extremely well for thousands of ordinary people who don’t have high activity levels.

We think that the way Prof Andrikopoulos presented his results in the media was disgraceful. He can’t be unaware of the human research into LCHF for diabetes and the problems with mouse models. He could easily learn, if he wanted to, about relevant research into the Paleo diet too. Absolutely none of this research supports the claims that he’s making on the basis of his 9 mice.

His claims, despite being based on minimal evidence having very limited relevance. seem designed to disrupt the efforts of those of his colleagues who are using LCHF diets to benefit people suffering from obesity or diabetes.

Can we learn something from these mice anyway?

What did the study tell us about Paleo diets?

Prof Andrikopoulos’s mouse study wasn’t designed to test the Paleo diet. Pete Evans’ version of paleo doesn’t include dairy, but the only protein the LCHF mice were fed was casein. This is one of the proteins in milk and its consumption is even linked to type 1 diabetes in some studies.

In fact, for a mouse, the control diet was more “Paleo”, if paleo means an ancestrally appropriate diet. The control mice were fed “wheat, wheat byproducts, fish meal, tallow/vegetable oil blend, soybean meal, skim milk powder, yeast, molasses” – the LCHF mice received none of these foods. They were fed sucrose (table sugar), cocoa butter, canola oil, ghee, and casein, with vitamin, mineral supplements and an amino acid that’s undersupplied in casein (DL-Methionine, which the control mice didn’t get, because the protein in their diet was nutritionally adequate).
This is a diet comparison that was very poorly controlled, if it was meant to be a comparison of carbs vs fat.

If we think that “Paleolithic diet” means “eat real foods that your ancestors ate”, rather than “eat lots of pure fats”, then Prof Andrikopoulos’s mouse study is more supportive of the Paleo diet than otherwise.

What did the study tell us about LCHF diets?

What about the LCHF finding? Prof Andrikopoulos’s “New Zealand Obese” pre-diabetic mice became significantly more overweight on an LCHF diet. Their insulin and blood glucose both became higher. This is a common effect of weight gain in people with pre-diabetes. Reduction in weight leads to lower insulin and reduction in blood sugar in overweight people with type 2 diabetes or prediabetes. A low-carbohydrate diet (but not a standard diabetes diet) even leads to improved glycemic control without weight loss if weight is kept stable.

A low-carb diet is more effective for weight loss than a low-fat calorie-restricted diet, and better for glycaemic control than the low-fat diet or the standard diabetes diet recommended by the American Diabetes Association.

What about the claim that a LCHF diet will cause someone with pre-diabetes to become diabetic?

This has been tested in humans by Maekawa et al (2014).[2] A course of low carb education was given to 36 people with impaired glucose tolerance in Japan, who were then followed for 12 months. None of these people developed diabetes (compared to 13.9% of the case-matched controls at the same hospital who received normal advice), and glucose tolerance was normalized in 69.4%, compare to 8.3% of the controls.

This wasn’t an RCT, but a retrospective case-control study; however, that doesn’t affect at all the finding that LCHF diet education, with good compliance, was not followed by the progression of pre-diabetes to diabetes in any of the 36 patients.

But if the weight (fat mass, not muscle) of an overweight person increased significantly – even on a low carb diet – glycaemic control likely would deteriorate. Significant fat gain on LCHF is pretty rare, but it can happen.

In this case study a woman with Prader-Willi syndrome (this is a genetic disease affecting nutrient partitioning and appetite, which currently has a poor prognosis no matter how it is managed) became obese and developed type 2 diabetes on a LCHF diet.[3]

What we can take away from this is perhaps, that LCHF and Paleo diets will not be much help to that rare person who becomes significantly more overweight (rather than less overweight or weight-stable) when they restrict carbohydrates, if the diet cannot be adapted to prevent this happening.

Significant weight gain in response to a low carb diet in someone already overweight seems to be very rare – fortunately it is a very simple diagnosis.

Our take home message: Mouse studies of human diseases are sometimes useful, but their use in LCHF research seems to be very limited, and can never overturn human research and clinical findings in real people.