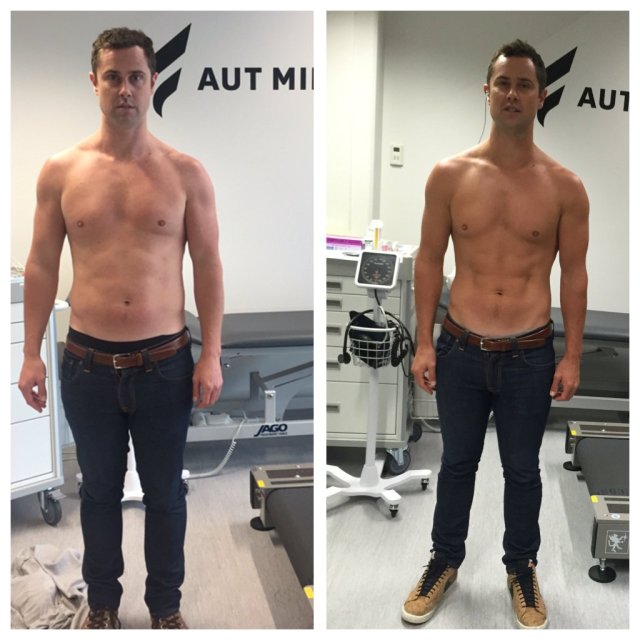 We tested Sam lat least year and advised him on some serious dietary changes – cut out the carbs and eat more fat.  Train your body to become a fat burning machine. Or in science speak – “stress your brain and body with low carbs and learn to supply energy from ketones.  Get yourself metabolically flexible.”

We felt he would have a better energy supply (he was bonking 90 mins into his rides), he would feel better (maintaining his high energy over the day with super early starts for breakfast TV was an issue), and he would lose some unwanted extra body fat (it pays to be lean for cycling long distances, and you look better – see above – he does look better!).

Well, here are the results.

In other words….Sam became metabolically flexible. He trained his body, through diet and some exercise, to use more stored body fat as fuel and reply less on carbs. This means he creates less inflammation and reactive oxygen species when he exercises – meaning he spares his immune resources and recovers faster, feeling better. It means he spares precious muscle and liver glycogen (sugar) and can access his fat stores – this means he’ll burn fat and lose fat, as well as not run out of glycogen while cycling (he is more or less bonk proof). And last, because he burns exclusively fat when he is resting and walking around he won’t fall off the glucose cliff every few hours and be driven to find high carb food.

He’ll have sustained energy and be able to stay lean!

I’ve included a short excerpt from our latest book –  What the Fat? Sport performance below about the whole concept of metabolic flexibility if you are interested.

Metabolic flexibility – The ONE big idea to understand

Metabolic flexibility really is the holy grail of nutrition for sports performance. Understand this and you will give yourself a powerful new weapon in your competitive toolbox. After all, knowledge is power! You will see how it’s actually done in the chapters that follow, but in the meantime, it’s important to know the science. We know science can be heavy going for the non-science-wired mind, but we really want you to understand the fundamentals, so we’ll guide you through it slowly and keep the really technical stuff for the ‘Extras for experts’ section at the end of each chapter.

Humans are designed to be metabolically flexible. That is to say, if you want to get the best out of your brain and body then you should be able to rely on fuel from both carbohydrates and fat as and when you need them. Someone who is metabolically flexible can use fat as the primary (and almost exclusive) fuel when they are resting, sleeping and moving around at a fairly slow pace. As they start to move around at a quicker pace – like fast running – they will be able to take advantage of extra fuel supplied by carbohydrate, and when they are going nearly flat out they will rely almost exclusively on carbs for fuel.

We measure metabolic flexibility in our lab using online gas analysis. We measure proportions of inhaled and exhaled oxygen and carbon dioxide to understand just how much fat and how much carbohydrate someone is using from rest to flat out exercise. What you want to see is represented in Figure 1.1; that is, this athlete mostly uses fat for fuel at low running speeds and mostly carbs at faster speeds. This athlete is a male triathlete who has been eating Low-Carb, Healthy-fat for over two years. He is highly metabolically flexible.

Figure 1.1: Calories per hour derived from carbs (red) and fat (yellow) [vertical axis] for a metabolic efficiency test; treadmill-running speed (min/km) [horizontal axis] using respiratory exchange. The athlete is a 39-year-old male elite triathlete who has been LCHF for at least two years.

Other athletes we test aren’t as good at using fat as this athlete. Here’s another test where the athlete is metabolically inefficient (Figure 1.2). This woman is a pretty good age-group triathlete, but she is really not able to access her body fat stores as a fuel source at any exercise intensity.

These two athletes are chalk and cheese. One can easily access his body fat stores as primary fuel at low exercise intensity. He can provide energy from fat right up to very high exercise intensity. He is a fat-burning machine who can access the tens of thousands of calories of fat he has stored around his body. He can maintain a healthy lean body weight easily and doesn’t have to eat sugar and carbs every time he goes training.

The other has to rely on the very limited carbohydrate (around 2000–2500 kcal) she has stored in her muscles and liver. She has to eat extra sugar every time she trains and fuel up again afterwards. She’s tired and has trouble getting her weight down to race.

Being a fat burner has obvious advantages in some sports, like endurance where having enough fuel to make the distance is an issue. Endurance includes long distance running, triathlons, cycling and anything else where you are training, racing or competing for a few hours or more. The fat burner has access to a big fuel tank (fat) and can spare the small tank that provides extra power when you need it (carbs). You can go faster for longer.

But it doesn’t stop there. The fat burner has the potential for significant health and performance advantages in any sport where weight, cognitive performance, fuel, and high training and competition loads are a factor. This includes weight class sports, all day sports like sailing, and team sports.

21 Comments on “Sam the fat burner”