Will taxing saturated fat save lives?

This headline caught our eyes in this week’s New Zealand Herald and then the subsequent paper we tracked down in PLOSone.

It is titled “Effects of Health-Related Food Taxes and Subsidies on Mortality from Diet-Related Disease in New Zealand: An Econometric-Epidemiologic Modelling Study”.

What the paper does is try to understand how taxing various groups of food at 20% would affect consumption, and then downstream from that, disease and then death attributable to those diseases.

What caught our attention first was the claim that ” A 20% tax on major dietary sources of saturated fat would result in 1,500 (950 to 2,100) deaths prevented or postponed“.

It surprised us because the meta-analyses of the effect of trials which reduced or replaced saturated fat have shown no effect on overall mortality. This is true in the analysis of randomised controlled trials just updated (2015) by Hooper et al, in the Cochrane reviews site.

They show no effect of interventions for the reduction of saturated fat intake on All-cause mortality, Cardiovascular mortality, Myocardial infarctions, Non-fatal MI, Stroke, CHD mortality, or CHD events.  There was a significant effect for Combined cardiovascular events (R 0.83 (0.72 to 0.96)) of reducing saturated fat over a standard diet, however this limited effect (mainly a reduction in the incidence of angina) was solely restricted to studies where polyunsaturated fat replaced saturated fat.

There is however, additional evidence for reducing saturated fat. Most important are the substitution meta-analyses of cohort studies – which are not actual interventions, but rather model how differences in what people do across populations relate to outcomes.  Taken together these papers (Jakobsen et al’s 2009 paper and Farvid et al’s 2014 paper) show a favourable effect of modelling what plausibly could happen in a population if they added extra polyunsaturated fat to their diet. They together note improvements in risk of heart attacks and CHD mortality whether that polyunsaturated fat replaces saturated fat or carbohydrate.

This is the “totality of evidence” you keep hearing about from the experts, telling us to eat less saturated fat.  Other meta-analyses have shown no effect whatsoever, but we may as well concentrate on the ones which do show something.

What we take from this is important, and is why the stuff about taxing saturated fat and the paper that came out of that analysis are making assumptions which are not reasonable in our opinion.

We take it that eating the low saturated fat diet in actual experiments doesn’t really do anything beneficial compared with eating the standard diet (telling people to do nothing) except perhaps a small improvement for combined cardiovascular events but not mortality (however it needs to be noted that in most of these experiments consumption of cakes and biscuits went down, fish and veges went up, in the polyunsaturated fat groups, so what are we really seeing an effect of?). These studies say nothing about other approaches like higher fats lower carb diets and others.

So, we wonder how these extraordinary claims of reductions in deaths by reducing saturated fat by taxes made it into such a prestigious medical journal and then the media?  Especially when there is no really strong evidence that doing this results in improvements in mortality.

Well that’s the big question, and when you do a bit of digging you find some surprising answers.

The first obvious thing is the paper they use as the meta-analysis to model the benefits of reducing saturated fat intake. It appears to be this paper by Law in 1994, which looks at possible reductions in ischaemic heart disease from changes in serum cholesterol.

This is really the B (lower cholesterol), then C (lower risk of heart disease), therefore A (lower saturated fat consumption lowers cholesterol (B) and therefore must lower heart disease risk (C))  argument. This is an assumption too far for the sort of effects they are trying to estimate. Especially given there are data more specifically related to diet (as above) which could have been used (the Hooper et al Cochrane review).

Second, and even more interesting is the choice of what constitutes high saturated fat foods. These are a diverse and interesting way to bring some very different foods together – butter, cakes, cream and cheese, biscuits, pastry cook products, beef and lamb as well as processed meat.  Really? You’d lump these things in the same category, when they have profoundly different effects on the glycemic and insulinemic environments? We say this because an emerging view is that it’s blood glucose and insulin which seem to be more important in predicting modern chronic disease including heart disease. 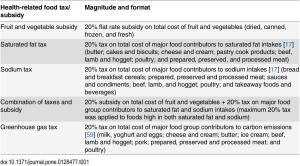 A third interesting assumption made in the PlosOne tax paper is that data from 578 Māori respondents was so unreliable that it needed changing “However, Māori diets were unusually low in absolute intakes of energy, fruit, vegetable, fibre and salt (20–40% lower than those of non- Māori), which possibly reflected the relatively small number of Māori survey participants (n = 578, 10%) and/or reporting bias. Therefore Māori diets were recalibrated using ratio of Māori: non-Māori intakes derived from the most recent National Nutrition Survey [17]. Recalibration increased Māori energy intakes by 37%, fruit and vegetable intakes by approximately 60%, and sodium by 26%. Following recalibration there were no important differences in baseline diet by ethnicity, which is broadly consistent with National Nutrition Survey findings [17].”
The 2008/09 National Nutrition Survey they refer to had 1040 Māori respondents, the PlosOne paper had 578. Was one sample really so much smaller than the other as to make its data so unreliable it needed to be corrected, just because it failed to conform with expectations?

So what can we take from this paper?

We wonder what would happen if they modeled…

Also in the fine print of the discussion is this interesting finding from the UK “However a similar UK study that modelled the potential health outcomes of four health-related food tax and subsidy regimens for the UK reported that two taxation scenarios (a saturated fat tax and a tax on less healthy foods as defined by a nutrient profiling model—both 17.5% flat rate taxes) would have little effect, or even adverse effects on mortality rates in the case of the saturated fat tax [58]. In contrast, the UK study found that combining a tax on less healthy foods with subsidies on fruit and vegetables would reduce deaths from cardiovascular disease and cancer [58]. The authors suggest that the observed adverse effects of the taxation scenarios on mortality in the UK were due to cross-PEs, for example, between fats and carbohydrates (i.e. as consumption of fats fell consumption of carbohydrates increased, the effects of the latter outweighing the former.)

Here’s the UK paper, which as far as I can tell also used cholesterol changes to estimate possible changes in heart disease and subsequent death from various diseases, and finds a null or possibly harmful effect because of different assumptions about price elasticity. So really – a tax that will save lives in NZ will kill people in the UK?

Other things to consider:

Also in the meantime, calories have increased, BMI went up, activity probably has gone down.

So why did CHD mortality go down? Lots of reasons, some not measured I suspect. But people a) started to quit smoking (which everyone agrees on) and b) started to clean up the environment and take care to reduce the environmental hazards in the workplace from the mid-1960’s on.

Diet and activity doesn’t seem to explain the drop in CHD mortality as well as it explains the increase in diabetes and overweight. Except possibly that our modern diet is better at supplying micronutrients, fibre and antioxidants than the diet of the 1960’s. Maybe that has helped.

Under the present state of science, sugar should be the only thing targeted by government action. We can be sure that sugar causes disease – just ask a dentist. There is no equivalent of caries with any other macronutrient. And, sugar supplies no micronutrition, it’s the classic empty calorie food. There are solid pathways linking sugar to fatty liver, diabetes, Alzheimers and heart disease. Mind you, people used to think that about fat. We can only hope that the science has progressed.

← What the fat? book sold out in a few weeks
How to interpret the latest meta-analysis on saturated fat and health →

18 Comments on “Will taxing saturated fat save lives?”