Getting started on LCHF – Part 1: Clean out day 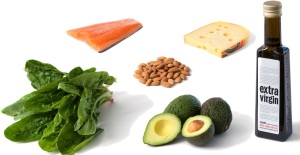 By far and away the most email, comments and questions we get are around how to start LCHF, what a LCHF whole food eating plan looks like, whether its doable for the average person, and how you know what success looks like. We’ll address this in a series of posts but here are the first three steps……

By Helen Kilding and Grant Schofield

Back in April of last year, Grant talked about what he and his family eat, but let’s go a step further and look at how you might adapt your current menu to achieve a Low Carb High Fat (LCHF) lifestyle, that delivers all the nutrients your body needs, in the quantities required. Note I say lifestyle, not diet, as an LCHF way of eating can be as beneficial and enjoyable for people who don’t need to lose weight as for those who do.

First there are two things you need to get over….your fear of fat and your fear of missing carbs. We often ask people, “What is it about a burger that you most enjoy?” Inevitably it’s not the tasteless bread roll that is used to hold it. Top a nice juicy burger, two even, with cheese, avocado, tomato and mayonnaise, wrap it in a big fresh iceberg lettuce leaf and see if you miss the bun. Ditto lasagne….replace the pasta sheets with strips of eggplant and see if you even notice. One proviso, make these switches without increasing how much good fat you eat and you do risk missing the carbs. You’ll possibly lose weight, but because of calorie restriction, not an increase in fat burning, which should be the ultimate goal. And as with all calorie restricted diets, you’ll likely regain the weight, and then some.

When you take out carbohydrate you must increase fat….protein should stay about the same. Far from fat making you fat, as Grant has spoken about at length, dietary fat and body fat are two completely different things. To encourage your body to burn fat, you need to deprive it of alternative fuel sources (i.e. sugar/carbohydrate) so that it’s only option is to use fat. When you eat fat, so long as there is no sugar around, there is little or no impact on the hormone insulin (the fat storage hormone) and also no blocking of the hormone leptin. It is leptin that tells the brain you’re full. You need fat to feel satisfied, plus it tastes great and makes the food you add it to taste great.

So what exactly should you eat? Here are some tips and tricks from someone who is not a great cook, who is preparing meals for a young family and who also enjoys eating out. None of which provides any barrier to an LCHF lifestyle. For a better cook, or someone with more time on their hands, the possibilities are endless.

Understand which foods are out for you and then clear them all out of your fridge and cupboards. Having a defined “start day” or “clean out day” is the “cold turkey” approach, which may leave you feeling a bit rubbish for a few days, as your metabolism adjusts the way it fuels your body, but after that you’re away. It’s our preferred method but we’ll explore more gradual methods later.

The following items are out (left), with some replacements on the right:

Boost your good fat component. We need plenty of fat but not too much of the Omega 6 fats which can cause inflammation.  Remove the manufactured seed oils, like sunflower, peanut, safflower and canola, and replace them with:

Step 3: Step away from the packages

Ditch all processed foods – these are likely to be high in sugar, other carbs, and Omega 6 fats. Make sauces and dressings from scratch wherever possible. This doesn’t have to mean hours slaving over a stove but if you really must use a jar of curry sauce (because throwing some spices and a can of coconut milk in a pan is so hard!), at least check that the carbohydrate content is no more than 10 g per 100 g and ideally less than 5 g.

Load up on things that will rot in a few days – in season vegetables, meat, fish, etc and you won’t go far wrong.

Follow these three steps and the end result will be a plate/dish that is nutrient dense and packed with natural flavour. You’ll feel satisfied (full) but not bloated full.

I wish I could come up with a different word to describe an LCHF salad (Mark Sisson calls them “Big Ass salads”), as to me the word salad says deprivation, sacrifice, boring, unsatisfying. But in the absence of anything better, I’m going to call them Super Salads. Yes they may and should include plenty of greenery, but what else goes in is only limited by your imagination. Favourites of ours are Chicken, Cos lettuce, hard boiled eggs, shaved parmesan, walnuts and plenty of creamy Caesar dressing, or Canned tuna, with green beans, rocket, cherry tomatoes, pumpkin seeds, avocado and lots and lots of olive oil.

An LCHF lifestyle that includes enough fat usually results in little or no hunger between meals. If hunger does strike, first make a mental note to ensure fat and protein intake are both adequate in future. Second, check you’re actually hungry and not just bored or thirsty. And third, have the following on hand: nuts such as almonds, macadamias, walnuts and brazils; an apple and some nut butter; hard boiled eggs; seed crackers.

And at night, especially if weight loss is not such a priority, a few squares of good dark chocolate and/or a glass of wine can be nicely accommodated in an LCHF lifestyle.

The “Whatever” day might be LCHF or it might not. The jury is out on whether having the odd ‘treat’ or a weekly blow out delays adaptation to an LCHF lifestyle. It’s something we plan to study in the near future. You might find that you don’t want or need it, especially as the benefits of LCHF start kicking in, but knowing that it’s there as an option can be just what some people need to make the whole concept more appealing/achievable and enable them to give it a go. If you’re physically active, a re-feed of “better” carbohydrates once a week (perhaps on a heavy training day) may also be beneficial.

So there it is….an LCHF lifestyle is a long-term decision to fuel your body in the way it was designed to be fuelled – to make it a more efficient fat burner rather than a carb dependent sugar burner. In an upcoming post we’ll look at the nutritional content of a menu like the one above and compare it to a typical Standard American Diet (SAD) and a low-fat, whole grains one. In the meantime, all we can say is give it a try. Never has the old adage “Don’t knock it till you’ve tried it” been so appropriate.

Summary of Foods to eat:[2]

Summary of Foods to avoid:

[1] Make your own guacamole, pesto, salsa or sour cream dips or choose ones with as few ingredients as possible and less than 5 g of carbohydrate per 100 g

[2] For certain individuals, some of these foods may not be advisable. This list is a starting point which is proving effective for a large proportion of people. By experimenting, you can find the carbohydrate intake that works for you – it might be <50g a day, 50-100g or up to 150g – and the foods that your body tolerates well and not so well.

← LCHF success, but will protein kill me?
“If someone created a drug this effective, everyone would be on it” →