Playing without rules, but with consequences 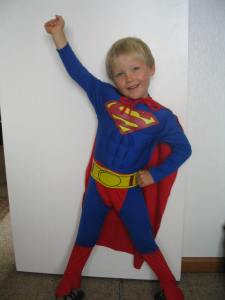 John (8) was trying to cut up some boxes to help his mother Anne. Anne gave him a very sharp knife, put some gloves on him, and sent him on his way.  As Rico wandered off, 6 inch knife in hand, she knew what would probably happen. “I thought he’s going to cut himself.  I’ve made some effort to protect his hands, and hopefully he won’t hit himself in the groin”.  Sure enough, 5 minutes later, John wanders inside blood dripping from his leg. Nothing serious. But a deepish cut nonetheless.

On the same day I went out the back after my older boys alerted me to the fact my three year old had ridden his bike (proper 2 wheeler, no training wheels) off the back deck (about a metre drop) onto the concrete path – no helmet. Cut head, otherwise OK.

Is this bad parenting?  Were Anne and I both negligent? Big questions.  Extreme examples  – Anne at least is past my comfort zone. And granted both incidents could have ended far worse. They didn’t, and our kids were exposed to risk with consequences.

The world has changed from the one most of us grew up in.  Do you remember as a child  the fun of exploring the world on your own terms?  Your free range childhood?  Do you remember the rough and tumble of the school yard jungle?

Our actions were our own and consequences were expected. In the light of the lack of rules, it’s hard to believe most of us made it! See this cool video

What has happened to all that?  Why has the modern childhood become a sanitised version of what most of us had?  Is it better or worse?

That’s been a big question I’ve had as I have watched my three boys grow up. I’ve been reflecting on this and thinking about my own childhood.  I’ve been thinking about the sign in the school my boys went to that says “No running on the concrete”.  I’ve been scheming how to change things.

Our project called PLAY in 8 NZ Primary schools came to an end, the story went viral.  That’s worldwide – everywhere, millions of reads,  millions of Facebook likes and tweets.  Here’s the original article on the front page of the NZ Sunday Star Times. Then everywhere else including the Atlantic, The Independent and the list goes on and on. The Economist even ran a story.  Bruce (Principal at Swanson School) is now doing more media than teaching, and I’m propping up when he can’t do it.  Bruce you are a legend.

What did we do at Swanson school?  We abandoned school yard rules, and rather than mini lord of the flies erupting, we saw spontaneous decreases in bullying, accidents, and improvements in classroom learning and behaviour. We saw a different twist on similar themes at our other schools. Full and final results of the study and all the science behind that will be coming in the next few months – it is going to take the team at Otago Uni time to work through the (massive) dataset.

I’m not sure exactly how all this happened – ridiculous rules in the first place and then talking a school into abandoning them – but it has, and the online reaction made me realise that we are not alone in thinking that the political correctness and cotton wool had gone several steps too far. That the emperor of children’s play was well and truly naked and has been for a long time.

The great paradox you see is that in the pursuit of safety and well being for our beloved children, we make them less safe in the long run.

I’ve said that for years – the right time to learn how to manage risk and manage emotions is when you are eight years old, up a tree or in a fight with the kid next door.  Rather that than when you are in a Subaru WRC at 18 with the cops after you and a few beers on board…..

So thanks everyone who read and liked the story.  Electronic likes are great to show a social change, but the reality is that when push comes to shove (literally), we need to actually walk the talk too.  So if you are a parent, my challenge is to keep living the dream and let your kids go free range. You will ned to push that button.

That’s it, risk and adventure on their (the kids’) own terms.  It’s primal.  It’s in their DNA, and it’s part of growing up with the skills you need to be part of society.

But every parent wants to be a good parent. They want the best for their child. They don’t want or need serious injury if it can be avoided. Parents want to operate within the law (at least I do, hopefully you too?)

So what about you? What are you willing to expose your child(ren) to, knowing some of the possible consequences? I’m not asking for negligent parenting.  I’m asking for risk carefully considered in the context of benefit. I’m asking you to reflect how many times you say “don’t do that” to your kids each day. Just some reflection on what you do.

There is no right answer. But there is the problem that you learn how to mange risk by being exposed to risk.  That’s how you do it.

I’d love to start a discussion on this in the comments below, or post your story by email.  Your free range childhood or what you think the right balance is for your kids.  Facebook likes are one thing. Actual debate is  better. Actually living this is sometimes scary but ultimately what we must move towards.

← A New Zealand supermarket photo essay…WTF
What am I doing wrong? →

21 Comments on “Playing without rules, but with consequences”