How happy are New Zealanders? 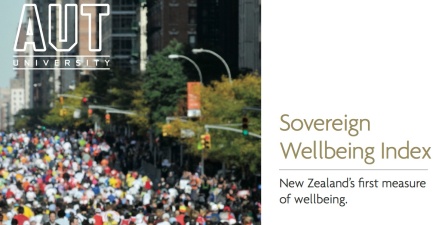 How happy are you?  How well are you doing in your life?  How happy are New Zealanders, and how do they compare with other countries?

I am very proud to announce the public release of this Sovereign New Zealand Wellbeing Index. It’s the first survey point in a six-year research partnership with Sovereign .  It’s also the first time anyone has tried to understand the epidemiology of wellbeing in a large (n=10,000) population representative sample in NZ.  We will follow some of the same cohort across the six years. The basic logic is that if you want to improve the wellbeing of the population, then first you had better measure it, and generate some hypothesis forming associations.

We also used the same measures as used in the European Social Survey wellbeing module.

So this has been several months’ work for me, and even more work for my dedicated research team, as well as a team at Sovereign working on the comms side.  Thanks everyone for the enormous amount of work.

Actually, that’s been the coolest thing about this project. The well developed comms and advocacy angle that Sovereign has been able to bring to the partnership.  They’ve got an interest in reducing stress and increasing wellbeing straight out form a claims perspective as well as the corporate social responsibility angle

Frankly, we are very used to doing high quality research which mostly gets published in journals a few people read, and a few masters and PhD theses which even fewer (maybe even only a few!) people read.

So now, we have had a great link into releasing the report, advocating government and policy makers, getting TV and media coverage of the results and so forth.

Mostly, I’ve been blogging about nutrition, exercise, weight loss and chronic disease prevention and treatment research at the Human Potential Centre at AUT University. That’s where I am a Professor (Public Health) and the Director of this research centre.  I will do a few more blogs in the wellbeing space to augment this report release.

These sorts of national accounts or indices of wellbeing have become popular in Europe recently and other less robust world-wide measures like the Happy Planet Index. To our knowledge, we are the first to do both mainstream health measures and wellbeing measures.

Sunday on TVNZ did a great job of presenting some of the results.  Thanks TVNZ.  See here.

You can go online and either take the entire survey and see what we measured, or just the “7-item flourishing scale”   Goto www.mywellbeing.co.nz. We have the norms for your age and sex, so you can compare you results with those overall and of similar kiwis in the survey.  Have a go its fun.  Take the quiz.

Using flourishing as a measure of wellbeing there were small but consistent effects of gender, age and income. Older, female and wealthier New Zealanders on average showed higher flourishing scores. Similar findings were found across all other measures of wellbeing giving some confidence in the convergence of measures.

We looked at the 25% of the population with the highest wellbeing scores and examined what factors defined this group from the rest of the population. This underpins the idea that psychological wealth and resources can be identified and public policy and action, and personal resources utilised to improve these determinants.

When compared with 22 European countries using the same population measures, New Zealand consistently ranks near the bottom of the ranking in both Personal and Social Wellbeing. New Zealand is well behind the Scandinavian countries that lead these measures.

New Zealanders did however rank above the mean for happiness, absence of negative feelings and enjoyment of life. However, we were still well below the top ranked countries.

New Zealanders make choices everyday about their wellbeing. These are both personal choices as well as democratic choices about public policy and action at local and national levels. It is our vision that this index can help frame both personal choices and public policy and action in New Zealand. If it isn’t wellbeing for ourselves and others we are ultimately striving for, then what is it?

The Sovereign Wellbeing Index will continue to monitor the wellbeing of New Zealanders over the next four years. We plan to follow-up some of the participants in this nationally representative cohort to see how their wellbeing changes with time as well as continue to run this national index and benchmark indicators against European countries.

← The cause of obesity – opportunistic voracity?
Does carb burning age you? →

3 Comments on “How happy are New Zealanders?”