Will sweeteners make you fat or sick? 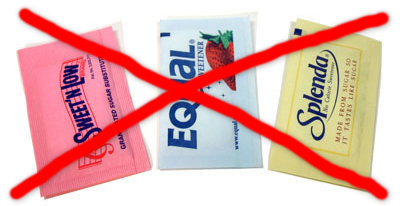 Now here’s a very controversial topic: aspartame and other artificial sweeteners. My conversations with (usually) men on sugar and substitutes usually go something like this:

Me: ‘Have you thought about replacing your fizzy drinks with diet drinks like Coke Zero or Diet Coke?’

‘It’s full of that artificial crap, like those sweeteners and other chemicals. They cause cancer. Diet Coke is a girls’ drink, as well.’

Me: ‘Even though half of that Coke will send your blood sugar through the roof, raise your insulin, and leave you hungrier than before you had it, while the other half that is fructose will go straight to your liver and screw you up in several other ways? And even though there is no evidence for negative outcomes, especially cancer, in the artificial sweeteners like aspartame, one of the most tested and long-standing additives to the human food supply?’

‘What are you talking about, [usually some profanity starting with d or f and ending with -head]?’ (Returns to drinking, laughing at me.)

Okay, my overall approach was probably fundamentally flawed and really misses the mark on the ‘how to win friends and influence people’ scale, but this is very typical of the responses I hear from men. I’m not a promoter of diet drinks for their own sake, but if you want a sweet drink I think the choice is a no-brainer. Sugary drinks – and fruit juice is in this category as it contains exactly the same amount of sugar as regular Coke – are a worse choice than a diet drink. Sugar is relatively toxic to the body. Aspartame is probably not.

What the heck does “probably not” mean? That’s a very good question. The answer is that there isn’t much evidence, especially experimental evidence with humans, showing adverse health outcomes.

Don’t you hate it when researchers sit on the fence and say that sort of stuff? There isn’t convincing evidence that sweeteners don’t harm you either. So it’s a double edged sword. The reality is that you would be better off drinking water. But that’s not the social and environmental reality of the world we live in. I’m saying that all things being equal, I’d prefer the diet drink to the full sugar version.

OK, I hear all the paleo, whole foods guys screaming – and I hear you. But how do you balance that approach with the pragmatism of public health? (clue: think about our approaches to reducing smoking which is obviously bad for you).

Here’s why I would take a more pragmatic approach to sweeteners. First, all foods are made of chemicals. Nutrients are chemicals. Too much or too little of any nutrient has adverse effects. In other words, when we exceed our biological capacity to deal with a nutrient it is almost always a problem. This is why high carb diets are a problem for some people. Aspartame, when synthesised, breaks down into phenylalanine (an amino acid), aspartic acid, and methanol – all of which are found naturally in foods. So I think it’s a matter of perspective and harm with sweeteners. We can deal with these substances in small amounts.

This isn’t everyone’s view, but I think there is now enough evidence to make this recommendation a public health one. In other words, on the continuum of water being the best and sugary drinks the worst, sweetened drinks and meals fit somewhere in between. That’s different than a personal health choice. It might be considered “harm minismisation”. Some people will say that by drinking sweet (even artificially sweetened) drinks you are giving people a taste for sweet stuff. My response is that we already like sweet stuff and no amount of abstinence from sugar will completely cure our taste for it. That being said, lower carb, sugar free diets do go a long way to curing the actual addition many people develop. Through sweeteners, food technology allows us to enjoy sweetness without the sugar.

Besides aspartame, which can have an aftertaste that some people find off-putting (and was originally developed as a fly spray which is even more off putting), there are two other popular sweeteners available in New Zealand: Splenda and Stevia.

Splenda is sucralose, which is made from sucrose (normal sugar), but with a refining process that reduces the calories. Because sucralose is inert (not metabolised) in the body it is calorie free. This product looks and feels a bit more like actual sugar and doesn’t have the same aftertaste as aspartame sweeteners, so it is much better for cooking and baking.

Stevia is a natural plant extract. In New Zealand it is sold under the name Sweete in 2 g sachets, which contain 1 calorie. Compared with sugar, the onset and duration of sweetness is slower and longer. Stevia is, however, about 16 times sweeter than sugar, the 2 g sachet providing the same sweetness as a teaspoon of sugar. So if you are worried about being natural, this plant-extract additive is pretty good.

On balance, I much prefer the Stevia sweetener.

A few comments about research on these sweeteners:

So will they make you fat and sick? They might, but sugar is more likely to do so. Are they harm free? Probably not entirely, but in an obesity epidemic let’s be pragmatic in public health.

2 Comments on “Will sweeteners make you fat or sick?”